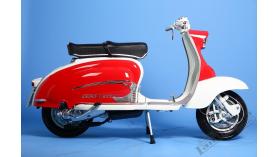 Bill is a petrol head with a love of all things motorized and the only thing missing from his collection of cool vehicles was a Lambretta. During a trip to RLC with his mate Scott, the scooter bug bit him and what better way to start off this amazing passion than with an with a Framebreather Series 1? There is no cooler vehicle on the planet so the deal was done and the instructions given for the scooter to be restored completely, along with some deft touches that Bill has chosen.

Series 1 Lambretta's are getting REALLY hard to find now - and Framebreather versions even more so. Even if the paintwork on this particular Lambretta was rough, the bodywork was sound and everything on the scooter was original to the machine. The rust was only superficial and there was no rot. All the 'hard to find' parts were present, such as the early type petrol flap, the narrow rear runner boards, speedo blanking disc, BOLT ON aluminium sidepanel badges and the complete filter system. This is a very early example with sidepanels that have the 'slotted' air intakes, thick chunky kickstart lever rear seat with lugs for the passenger handle. All in all, it would prove to be the perfect basis for Bill’s restoration project. One VERY cool machine.

Once work commenced, it was stripped 101% and sent off to be blasted before being subjected to RLC’s usual pre-paint ‘dry’ build. Rokka did his magic with the paint-gun and the bodywork came back gleaming like a silver dollar. Bill asked us to replace the original motor with a polished CasaCase fitted out with a piston ported BGM225 kit and PHBH30 carb - but on the understanding this still has to breathe through the original Framebreather set-up. The original engine will be restored and used as a showcase at custom shows.  A Cyclone 5 Speed, Casatronic ignition, a BGM clutch and a Casa 42mm Clubman exhaust complete the picture. The original drum hub has been replaced with a Casa DoubleDisc unit and this was painted in the scooters’ ‘River Grey’ colour, along with the CNC CasaCooler flywheel cowling, for that Street Sleeper look. The 60’s style BGM dampers set the show off perfectly and Johnny Walklate’s incredible polishing of the CasaCase is second to none. Not surprising as the man is a genius and rightly at the top of his game. A lush RLC Pegasus seat was also added for both looks and comfort (the original saddles have also been restored) and one or two choice, period accessories were also requested to adorn the scooter.

Once the scooter was completed and fired up, we had it jetted in no time at all and did a bit of running in.

We pride ourselves on the work that goes into designing the parts we produce and as much effort is made on how they work, as the way they look allowing them to blend into the scooters design, rather than looking like an unsightly after-thought. The proof is in th end result and everyone who see’s this machine comments on the fact that the scooter is amazing because at first glance no-one realises just what is going on. It looks standard but isn’t it. Even the hydraulic double front disc brake is discreet and not in-your-face. The painted flywheel cowling is sleek. You have to really look to see that it has a CasaCase fitted.  All summed up, truly a classic Lambretta for the 21st century.