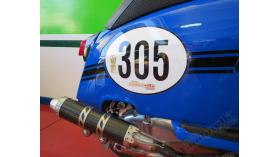 Another scooter recently completed here at RLC is this Lambretta GP. It’s based on a VERY early 1978 Indian GP although 99.9% of the bodywork was Italian and therefore everything fits perfectly. This scooter is unique in that it is the famous BSG305 No.1! About two years ago, when we shoved BSG under the limelight and we show-cased their 305cc engines to the World. This is the very scooter that was featured in all the mags, forums, blogs and also it was shown on-line everywhere. Dean then rode it alone all the way up to a rally in Holland from Italy, then over for a ESC European scooter race meeting in Eastern Germany - and then finally back to Italy. But not before popping into Scooter Center to have them test it on their dyno and see their faces as it produced 50bhp before their very eyes. With that power on tap, it’s possible to hit nigh-on 100mph in 3rd gear….and then as you put it into 4th, it simply takes off again. Mental in every respect.

It’s no news that BSG are no more and the 6 x Lambretta engine casings that have been manufactured will become collectors’ item. RLC has the job of building them all and we will run and test each one. The engine in this scooter is what set the scooter World alight and quite rightly so. This was like NOTHING ever seen before on the scooter scene. All this of course means that the few BSG305 engines that did see the light of day (6 in total), will all become SERIOUS collectors pieces - and quite rightly so what with their amazing CNC finish. We have recently completed four 305cc engines and one is seen here.

This scooter here however is EXTRA special as it has engine NUMBER ONE and this will become the Holy Grail of scooter engines. We stripped it, rebuilt it and then completed it. The scooter itself incorporates ALL the very best choice parts that RLC, Casa Lambretta and Casa Performance have to offer. On the bodywork front, the all-metal bodywork was painted in the Casa Lambretta Racing Team blue, but with unique, simple BSG305 graphics.  All parts used are top drawer and of European origin. It has a Casa Performance (CP) hydraulic DOUBLE disc up front, BGM & Mupo shockers, CP tubeless wheels, a custom made Dante seat, original Nannucci inside legshield toolbox and a NOS battery type ignition switch to ensure the SIP speedo stays on thanks to the battery installed on the scooter.

The overall effect is simple, very clean and slick. It looks right, it feels right and it rides right. Sorted. Now it’s off to it’s new home in Northern Italy