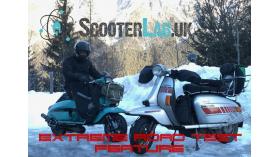 During the recent SLUK feature on RLC and Casa Performance, Iggy effectively ‘nailed our hat on’ during an interview whereby we touched the point that a good way to put to bed any comments that the SSR motors we manufacture are too highly tuned for touring, would be to attend the Meltdown event by scooter. This alone is not much to ask on paper, until you throw other factors into the equation such as the trip would be untaken in artic-like conditions at the end of January with the Italian alps also barring our way. The ‘Scooterist Meltdown’ event is held on the Dutch–German border and has become ever-more important in the annual scootering calendar. It’s also a great show-case for European scooter dealers and close enough to the Dutch ports to always attract a healthy UK contingent. It’s more of a scooter-themed mega-party than a rally and the number of scooters ridden to the event rarely reach double figures.

For the trip Mickyboy chose to use a Lambretta GP fitted with a full-fat SSR265 Scuderia motor with 45-46bhp at the rear wheel and I chose to ride a Serveta Lince fitted with a prototype 32bhp SST265 (Touring) motor. The main difference between the two versions is the SST has a non-bridged exhaust port, a smaller carb running through a filter and a ‘box’ type Lambretta exhaust, rather than the usual expansion chamber we normally fit to the SSR motors. Basically the SST is a de-tuned version of the SSR motors, designed for high speed touring but quiet enough to keep your neighbours happy on a Sunday morning. The trip would be a good test for the scooters…and also the riders. I for one have never had heated bike jackets and gloves and take a fairly troglodyte approach to riding i.e. simply cover up and do the miles. After carrying out a bit of techno consultation with Dangerous Dave Gould and Sticky, some last minute running around got us kitted out and wired up. Literally. Micky went one step further and bought a Tucano Urbano leg cover just to ensure he looked like a complete numpty. A warm numpty - but still a numpty.

Come the off, with both scooters decked out in super-twitchy snow tyres (a necessity for German law) and box-fresh engines, we decided to run them in a little heading North across the Italian flatlands. This was cut short after all of 12 miles when my scooter decided it wanted to be as noisy as its SSR stable-mate and spat its silencer across the road into the gutter. This wasn’t a complete surprise as the Frankenstein box exhaust we’d welded up out of about 15 others for the SST motor was primarily made for dyno testing, rather than trans-European touring. As we were close to Italian tuner, Roberto Barone’s workshops, we made a small detour there to get a Protti expansion chamber fitted. Half an hour later we were up and running once again but the decision to stop for lunch eventually meant when we did eventually set off, it was in rapidly diminishing daylight. A dense pea-souper fog had also come down over the whole of Northern Italy and coupled with swirling misty rain, visibility was reduced to an absolute minimum. Although the change of exhaust had pushed my power further up the rev range, luckily it was still pulling like a freight train. By late evening we decided to stop in a small town in the Trentino region as visibility was so bad and we were drenched.

The following day we wanted to make up for lost time so an early start saw us set off bright n’ breezy and with 500kms of reasonably easy riding under our collective belts, we were now increasingly opening the scooters up at nearly every opportunity. We were now becoming more familiar with the scooters ‘habits’ and the SST was using about 20% less fuel than its more powerful SSR counterpart, which was just as well as I’d kept the Serveta’s standard 8 litre tank. Long distance riding gives you plenty of time to think, mull things over and in Micky’s case, come up with daft ideas to annoy me. His usual party piece was to disappear from sight (and earshot) for a while, to then come hurtling past me on his back wheel whilst changing gear. This mono-wheeled lunacy normally took place when I was at 70mph. Oh to be young.

By the time we rolled into wonderful Austria, which is a sort of clean, graffiti-less Italy, the temperature had plummeted even lower and roadside neon signs showed it was a scorchio -6°C, which when coupled with the wind chill factor meant Micky was having issues with his breath freezing up on the inside of his glasses every time he exhaled. I wonder if they do heated glasses? After Innsbruck we took a slight detour into the mountains as we headed across towards Southern Germany. Our goal was the town of Ulm but that became unrealistic what with diminishing daylight and the temperature steadily dropping. The Austrians do a love a bit of salt on their roads and the constant pitter-patter sound of the same being thrown up by the tyres onto the underside of the scooters bodywork and exhaust made it sound as though we were riding on gravel. We continued to ride further and further up into the Alps and by the time darkness fell we were about as high up as we could get. A quick search on Booking and half an hour later we were firmly ensconced in an alpine resort type hotel with the scooters safely tucked away out of sight in their secure garage, alongside dozens of pairs of skis. Apart from the initial hiccup with the silencer on the SST, both scooters had performed faultlessly up to that point and were happily taking all that we were throwing at them.

The next morning, our initial intentions of setting off dead early were scuppered when we set foot outside. The sun was nowhere to be seen, the temperature was -10°c and the road looked like black glass. We decided to at least wait until the sun made an appearance, so a second breakfast and more coffee were voted upon. An hour later we ventured off into the morning mist with great care taken on the corners due to the omnipresent black ice everywhere. A real Brucie Bonus of having 30 / 45bhp to play with is that even when totally out of the power band, you still have enough grunt, at any speed, to utilise as needed. The power output of the SSR / SST engines isn’t on-off, so if one of us was going to end up on his arse, it would more than likely be down to be our riding rather than aggressive output from an unusable engine. As it happens neither fell off but there were truly an abundance of occasions when sheets of ice made riding nearly impossible. By the time we’d dropped down out of the Alps and we were well into Southern Germany, the temperature had rising to a sweltering 5°c, the sun had disappeared and it started to rain. Part of the idea of the trip was to test the engines in all possible conditions, so at Ulm we headed for the Autobahn signs and let rip. These roads have no speed limits so care must be taken when overtaking, at whatever speed you’re doing. However, it’s a great testing ground and knowing you’re not going to get a ticket is the cherry on the cake. My scooter had been geared for 85mph in 5th so I took it up to 80mph and just sat there, stress free. This was fast enough to allow me to spend most of the day in the 2nd and 3rd lanes, with Micky overtaking me every now and then just to remind me what his extra 15bhp was there for. The SSR revs hard and high, and to see his scooter rapidly stomp off into the distance was quite astonishing. German petrol stops all seem to be about 50-60km apart which was bloody annoying as I was having to continuously stop to fill my still half-full tank, as two stops were probably pushing my luck to the limit. Now I know why people rave about larger fuel tanks and my lesson my was truly learnt. Micky’s 13 litre tank from John Walklate was perfect for the trip and since returning we are now also testing an Oiltek tank as well.

By nightfall we were just South of Cologne and once again drenched right through. Micky was now feeling the cold, what with the battery in his riding gear having long gone flat some hours previous. My Serveta was fitted with a charging device from electronics guru Anthony Tambs and that proved faultless in supplying the necessary power to keep me warm. To get to the hotel meant we had to cross the river Rhine on an open ferry in the sleet and rain and when we went to pay, the ticket chap indicated to a German biker sat in car, who had kindly paid our fares. A nice gesture. We thanked him and rolled off the other side.

Thursday, we hit the Autobahns once again for the last leg of the trip, taking only a slight detour to see our good friends at Scooter Center, who were the perfect hosts as ever, taking us out to lunch while our riding gear dried off a little in Philipps office. After packing up some more 2 stroke oil, we headed off into the wet, gloomy afternoon for the last 80 or so miles to the Meltdown event in the small town of Kalkar, caning the scooters to within an inch of their lives all the way there.

Rolling into Wunderland gave us a sense of achievement and we confirmed what we’d set out to prove and I think Iggy owes us a drink. If things are built right, with the right parts and the emphasis on quality is the foremost concern, then there is no reason why high bhp motors cannot be ‘all things to all men’. If you take a normal Lambretta engine that’s designed for 10bhp and tuned it to 30bhp, or more, reliability is always going to be on a knife-edge as you’ve taken it well over its natural limitations. On the other hand, taking an engine where it, and all its components, are designed for 50bhp means you are still well within its mechanical limits and your enjoyment goes up ten-fold as you get more beer time and spend less time changing cranks by the roadside. Sure, there is always room for improvement and we took note of a couple of small things that can be improved on during the trip. These changes have already been implemented since our return and that’s what product testing is all about. A new version of the box exhaust for the SST265 has already been made and is undergoing testing. We had been testing four new, or improved, products in total on the two scooters - ranging from a completely new, Italian made 12 pole electronic ignition through to a piston that a manufacturer had given to us specifically to test over distance in adverse conditions. Other than the initial aforementioned problem with the silencer, we didn’t touch or alter anything else. Absolutely nothing. We just fuelled up and rode hard. Our main point was to show that highly tuned engines can be used for trouble-free high-speed touring and that was achieved, big time. If an engine like this ticks your boxes, contact us or come on over for a test ride.