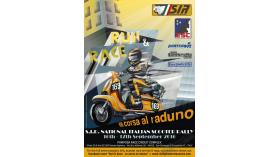 This event was a combined 'S.I.R.' (Scooterclub Italiani Riuniti) National Italian scooter rally and also was the Grand Finale of the E.S.C. (European Scooter Challenge) scooter races! Held at the Pomposa race circuit complex on the Adriatic coast on September 16th-18th 2016, it saw riders and races coming together from all over Europe for what was to be a unique event in Italy.

Last year Dean came up with the idea to host an Italian event that was similar to the format of the German ‘Run & Race’ events of years gone, by hosted by the Stoneheads S.C. The basis is simple : combine a full-on scooter rally with scooter races and you have an interesting spectacle for the rally goers and the actual racers get to compete in front of a large audience that in the main have never seen a scooter race! The idea was proposed during the S.I.R. AGM at the end of 2015 and accepted, albeit after a lot of help and support from the President, King Andy. The main problem was the financial side of things as if the event failed there was to be a massive bill that S.I.R. and E.S.C. simply could not cover. To that end, Rimini Lambretta Centre, Parmakit and Casa Lambretta stepped in and provided a guarantee to cover all costs if the event flopped.

The following months saw a lot of activity trying to find a suitable track that was big enough to host a scooter rally as well, with all-nighters and rally area. Eventually the (initial) location of Pomposa was chosen and confirmed. It’s situated about an hour North of Rimini on Italy’s Adriatic coastline and other than the racetrack, had a large surrounding area for the scooter rally-goers, stalls, stands, music, beer ‘stations’ etc. Once all the permits and permissions were in order with the local council, Police, it was all systems go. The S.I.R. crew saw to promoting the rally whilst we at RLC were given the job of coordinating the race side of things. That meant combining all contact of the riders and various racing associations who were to compete in what was to be the last leg of the E.S.C. 2016 Championships. The E.S.C. are the mainland European equivalent to the British BSSO organisation, and they run races for metal-bodied geared scooters all over Europe. They are quite laid back in their approach and as they have been doing this for years, they are a well-oiled machine. However, this was the first time that they were to hold a race in Italy and as Parmakit & Casa Lambretta Racing Team had competed in their 2015 Championships, we wanted to give them something back and not let them down.

One of the problems was the logistics for the event as we wanted racers from all the European countries and for the first time, to get some riders over from the UK to compete in Italy. Initially there were lots of people coming but a mixture of cold feet, Brexit massively devaluing the Pound and the fact that the final race of the BSSO Championship was the weekend after Pomposa, meant that just a handful of UK riders make the effort to come over. Under the guidance of ever-present BSSO main-player Jayne Morris, we were fortunate to have some UK riders attend and it was a massive honour for us that they made the effort to come over. The ESC riders came through and arrived en-masse and we also had some Greeks come over to race as well! In total 68 riders raced over the course of the weekend which is superb for a first event. For the rally we we met opposition to having an open-air event at the Pomposa track so we were forced to look for an alternative. Two S.I.R. girls Francesca and Paola eventually found ‘Camping Florenz Village’ which was just 2km’s from the track and with it’s location right on the beach and with ample facilities on offer for the rally goers, it was a no brainer.

The weather in Italy in September is usually good but we all knew rain could wipe the event out immediately. With the forecast changing almost hourly in the days leading up to the event it was fingers crossed - despite Italy being in the midst of a 30+ degree late summer heatwave. Come the Friday of the event there was a constant influx of racers and rally-goers arriving constantly but the weather was dreadful. The heavens opened big-time and the downpour was almost no-stop until mid-evening. Despite this 250 signed on and collected their rally bags containing all manner of goodies kindly offered by the sponsors; Casa Lambretta, RLC, Parmakit, Motomix of Rimini and Scooter Center / BGM. The evening do followed a buffet / aperitif @ Florenz and was well attended. The only downer was the news that Maximilian Kretschmann of the Munich Bunglers Race Team had his race Vespa stolen just 5km’s from Pomposa (more details below and in the pics).

Come Saturday and the weather forecast was bang on! Blue skies and the whole place was soon brought up to temperature with a scorching sunshine. By early morning the track had completely dried out and the E.S.C. riders briefing was being held by Stoffi and Co. On the track the morning was spent with free time and timed sessions for eventual grid placings for the races proper. On the other side of the grandstands, the whole place was swarming with scooterists milling and chilling, looking around all the stalls, stands and the racers gazebos’. There was loads to see and it fantastic to see hundreds of people mixing and enjoying the festival atmosphere. Some dealers also attended, such as the Scooter Center crew who made a mega journey down from Cologne so hats off to them for bringing along the BGM roadshow for the Italian scooterists to see first hand.

The rally goers were treated to a unique show as the scooter racers fought battle after battle on the track and the grandstands were full once the Championship races got underway immediately after lunch. The ESC run various Klasses (K1. K2 etc.) and all ‘guest’ / non-E.S.C. riders were given the choice which Klasse they wanted to race in. the reason for this is that in the main, European races are held on Kart track which are tight, very twisty and top speeds are in the region of 130kph/80mph. Races in other countries, such as the UK, tend to be held at car tracks and whilst the corners are almost non-existent, the top speeds are anything up to around 185kph/110mph+. This makes for very different riding styles and machine set-ups but as the E.S.C. said from the offset, the main point was that they wanted everyone to enjoy themselves so ‘guest’ riders were NOT obliged to alter their scooters in any way to meet race regulations. Also, for the first time ever, automatic scooters (from the UK) were allowed to enter.

The races covered all manner of set-ups and there were groups for everything from scooters with ‘standardised’ parts (thus putting everyone partaking on an even keel), riot-squad mentally tuned machines, a Street Klasse and even a ladies Klasse. The racing was top level and judging by the amount of people and cheering watching in the grandstands, it was thoroughly enjoyed by all. Sorted.

By early evening the races had concluded and the prizes were given out on the podium in front of a large, receptive crowd. One of the top prizes, was a Parmakit cylinder kit that was awarded to Max who’d had his Vespa stolen. To top that off, a whip-around was also held for him. After the awards were concluded, most people started heading back to the Florenz Village in time for the evening dinner and party. The meal was certainly no more than ‘average’ and Florenz really let themselves - and us - down. During the day we had also been informed that The Beat (who we had booked to play) could not attend due to their flight from the UK being over-booked and therefore had been obliged to cancel. This was a let-down but as a mega sound-system had been set up for the band, the decision was made to use that for an open air party. This was great but was also TOO powerful and in the early hours, the Police arrived to ask us to lower the volume as the residents in adjacent holiday villages had complained about the noise! The party was subsequently moved to the indoors hall where it continued until the small hours.

Overall the event was a great success and although there were a few hiccups along the way, I think it’s fair to say that all those who attended had a good time. If we decide to hold the event next year we’ll sort the issues we had and major attention will be given to the food & catering for major improvements. As a combined scooter run with scooter races, it was definitely above and beyond all expectations. Judging by the emails we have received since, there are now more than a few scooterists that have caught the ‘race bug’!