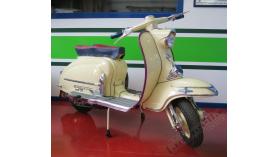 We were asked been asked to do a complete conserved resto’ on this nice, reasonably clean Lambretta Series 1 TV175. The work entailed completely stripping the scooter down and then painstakingly rebuilding it so that it was mechanically perfect and ran and rode ‘as new’, or even better. Particular attention was given to the fasteners & hardware, and the paintwork needed to be addressed in a lot of places. By that, we must remove overspray where it has been touched up or ‘blown in’ over the years and render the tone of the original Ivory paintwork completely uniform all over the scooter.

We stripped the scooter down and began to work on the motor. The bodywork was okay although there was a lot of rust that needed to be treated, especially in those hidden-away areas. The original stone ship was a bit of a mess in most places, and totally missing in others, so that needed sorting out as well. The frame was checked in RLC’s jig and it was was slightly out, so was straightened as necessary. A few mechanical things had been done, with some key parts being changed as well, to the scooter over the years although this Lambretta is 60 years old so that was to be expected. All the linkage and fasteners were sent off to be zinced, burnished, plated and refurb’d as necessary, as this had to be a ‘factory’ type resto....

Once the bodywork came back from the paintshop, it was pretty great. The filler was removed and the paintwork tidied up by being blown in here and there, without losing any originality - and that is always the hardest part with a conserved restoration. Do too much and it turns into just another badly done resto'. Whilst the rebuild of the bodywork began, the engine was completely rebuilt, using a lot of NOS parts.

After a lot of work, the end result is what you see here. A stunning scooter with most of the paintwork having been saved, which is quite astounding considering how bad it appeared at first. The owner also has a lot of period bling, which we absolutely love, so only served to add to the machines appearance once completed. Enjoy.