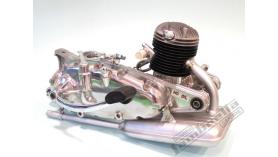 This engine was in really dire shape when it arrived to us to be restored for the editor of ScooterNova Magazine, Andy Gillard. It had been subjected to VERY damp conditions (or completely submerged in water?) as the water-damage was so extensive as to render EVERYTHING absolutely seized rock-solid.

After being completely stripped down, it was then cleaned up and it became apparent that nearly all the internals needed to be replaced. Some Starstream parts are VERY hard to locate (such as the crankshaft) so  we set about sourcing all the parts needed. Incredibly a NOS crank came up and that completed the picture enabling us to get the job done. As with all RLC engine rebuilds, all the gasket faces were lightly skimmed and then the rebuild stated. A massive amount of parts were NOS which made the job of the rebuild a lot easier and several hours later the finished article is what you see before you here.