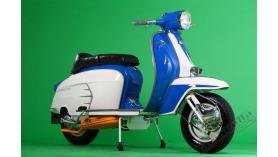 This is John Medina’s project based on a right scabby Lambretta SX200 that he bought from Austria. Whilst it was certainly no looker, the scooter was quite straight and in apparently reasonable overall condition.  As always, John had a crystal clear idea on what he wanted and worked through the project with Dean, so the boys in the workshop subsequently had a clear guide as to what the outcome would be.

The main base colour is from a Ferrari Dino with some choice second colour additions. John had also amassed some VERY top drawer parts for this scooter to compliment the looks. Once the bodywork had been stripped it was obvious that there was quite a lot to do to get everything ship-shape before being painted. The bodywork parts were sent off to be blasted whilst the engine casings were then thoroughly cleaned, and repaired where needed.  We blasted and straightened the frame in RLC's frame jig until it was dead-perfect perfect and then set about the 'dry build' before sending the bodywork off to be painted. John had some NOS parts in the fold and these were as lush as ever to work with and everything fitted a treat. A metal GS160 legshield toolbox to mount the original Smiths rev counter was adapted until it was a nice, tight fit and the headset top was welded for the original Smiths speedo. We do this so that it sits perfectly and not perched on top of an unsightly 'tube' as some others do. Once completed, the headset top didn't even need any filler before painting. The Brazilian wide type rim completed the picture and again was a nice choice part to set the scooter apart from the masses.

The engine casing itself was repaired, acid dipped and then rebuilt with the engine sidecasing prepared to have the rev counter drive mounting area welding up and machined so that it actually looks like a factory modification. The cast iron Innocenti barrel was taken out to 225cc and tuned to a 60’s specification. The Scoot-Mobile manifold has a Mk.1.5 32mm Amal fitted and the electrics are a 12V points 180W Ducati set-up. The exhaust is an original Ancillotti 42mm lions-paw box and a Cyclone 5 Speed gearbox topped the build to make it ‘all singing and all dancing’.

The bodywork was painted up in its Ferrari Dino livery and even if we say so ourselves, looks outstanding. The scooter was carefully and meticulously rebuilt and with all the nice optional extras, it soon became apparent that this was going to be one very sharp looking machine. The bodywork slotted together nicely as it was dry built previously and the super-fine pinstriping is the cherry on the proverbial cake. Other nice touches are the pin-striped original Innocenti wheel rims, the restored Ancillotti exhaust with a recess on the upper side for the Smiths rev-counter drive and the original slopeback seat.

Once completed the scooter was fired up and she sings as good as she looks. The scooter is now being registered before heading over to Jerseys sunny shores to join the other scooters in Johns collection of RLC restored machines.