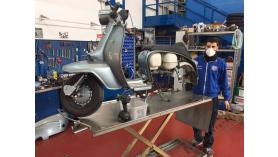 Details: The owner of this Lambretta Special 125 is our dear friend and customer Luca. Few months ago he decided to tune his scoot with SS kit... already a beast... but unluckily the fate wants that Luca was invited to testdrive the DL265 Scuderia tuned my mentally twisted guys of Casa Performance and capables of more then 50BHP... From that moment, the need for speed started to dig the brain of Luca... and that's it... his Lammy now has a 265 scuderia!!!
Site map
TERMS & CONDITIONS
FAQ
Contact